The economic effect of applying GROUNDFIX for corn and sunflower

To assess the effectiveness of agrotechnologies and, consequently, investment attractiveness of the agricultural companies, in addition to common – parcels of land, value of the company’s assets, profitability, cost-effectiveness - a number of other economic indicators mainly borrowed from foreign financial system are now used. One of them is EBITDA (stands for “earnings before interest, taxes, depreciation and amortization”), which reflects the amount of profit before all mandatory payments are deducted from it.

It reveals not the profitability of an agricultural company or farm, but the effectiveness of the main area of their activities, that is, the ability to work and earn from each hectare. Since the indicator is of foreign origin, it is expressed mainly in USD.

Among the elements of modern agrotechnologies that can increase their efficiency by increasing the productivity of arable land, as well as improve crop quality while improving soil fertility is the use of biological preparations. One of them is the organic fertilizer GROUNDFIX, developed and manufactured by the company BTU-CENTER. The mechanism of action of its’ selected biological components is based on a phosphorus and potassium mobilization from insoluble compounds of the soil, fixation of biological nitrogen and effective use of nutrients from mineral fertilizers applied in the soil, activation of crop growth processes and enhancement of stress resistance of plants.

The analysis of the results of agronomic efficiency expressed in the crop yield and economic efficiency expressed in EBITDA was carried out on the basis of experiments in various soil and climatic conditions of Ukraine. It is established, for example, that in the conditions of Lviv region application of GROUNDFIX (5.0 l / ha) during pre-sowing tillage for corn provided an increase in the yield of 0.39 t / ha compared to the option without applying the biopreparation, and EBITDA increased from 479.6 to 520.5 $ / ha. In the conditions of Poltava region, row fertilization with GROUNDFIX (0.67 l/ha) mixed with 5:20:5 liquid complex fertilizers during corn sowing provided an increase in the yield of this crop of 0.29 t / ha compared to the option where only liquid complex fertilizers were used, and EBITDA increased by $64.5. High efficiency on corn was also provided by the aftereffect of the fertilizer GROUNDFIX applied at the rate of 5 l / ha for the preceding crop. As a result, the yield increased by 0.3 t / ha, and EBITDA increased by 44 $ / ha.

The calculation of the efficiency of agrotechnology on sunflower showed that in the conditions of Kyiv region, the increase in the crop yield when applying 5 l/ha of GROUNDFIX during pre-sowing treatment was 0.75 t / ha, and EBITDA increased by $ 210/ha. In the previous year, the increase in the same conditions was 0.61 t / ha and about $ 170 / ha, respectively. In the conditions of Vinnytsia region, application of the biopreparation GROUNDFIX (5.0 l / ha) provided an increase in the yield of 0.32 t / ha, and the economic advantage in terms of EBITDA was 74.5 $ / ha for the price of sunflower seeds of 327 $ / t.

Consequently, application of the biological fertilizer GROUNDFIX provides more rational use of resources, in particular mineral fertilizers, contributes to more complete revealing of the productivity potential of varieties and hybrids of agricultural crops and makes it possible to increase the economic efficiency of the agrotechnology in terms of EBITDA in case of corn on average by $ 50 / ha, and sunflower - by $ 100 / ha.

WHEN SOIL IS TIRED… 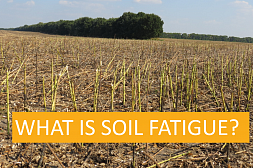