Soil is a priceless and non-renewable vital natural resource to humankind. Soil is at the foundation of everything we and the other life on Earth need to live, including food, fibre, habitat, shelter, recreational space, clean air and water, and more.

95% of food is directly or indirectly produced on our soil. (FAO)

However, the situation with soil health is deteriorating. Soil degradation is happening at an alarming pace, contributing to a dramatic decline in the productivity of croplands and rangelands worldwide. 33% of the Earth's soils are already degraded, and over 90% could become degraded by 2050 (FAO and ITPS, 2015.)

KEY ELEMENTS OF THE SOIL QUALITY

Rich, healthy soil provides a generous harvest. Moreover, soil health and its fertility have a direct influence on the nutrient content of food crops.

Soil Health is the ability of the soil to sustain the productivity, diversity, and environmental services of terrestrial ecosystems. Typically, healthy soil will be teeming with biodiversity and may include a variety of earthworms, 20-30 types of tiny arachnids, 50-100 species of insects, hundreds of different fungi and thousands of bacteria species.

Healthy soil has a good combination of soil structure, chemistry, organic matter content, biology and water permeation for its type. Physical, chemical and biological properties define the soil quality. We present here the leading indicators of all three groups

Table 1 Elements of the soil quality:

"We distinguish three components of a healthy soil: chemical, physical and the most important - biological. We used to focus on the chemical component, but now we have realized that we should be paid the main attention to the biological one. I mean all biota that lives in the soil, as well as biological properties and characteristics of the soil itself. Soil is a full-fledged living system that exists and develops according to its laws. In particular, it is necessary to study soil microorganisms and their activity and role thoroughly. " - says Harold van Es, Professor of Soil Science, Ag Tech innovation specialist at Cornell University (New York, USA).

Diverse farming approaches promote the sustainable management of soils. There are four main principles of soil health management, according to FAO.

Thanks to the ongoing activities of international organizations and scientific institutions for conserving natural resources, the most effective practices of healthy farming have been collected.

Many experts think it is better to pass to plough-free tillage to avoid loss of moisture and hence the yields. Therefore, it is necessary to try to minimize tillage to look for technologies that will be optimal for the conditions of a particular farm.

"I am against intensive cultivation technologies because they negatively affect the soil, disturb its structure, and destroy the surface layers. However, I would not advise those who decided to do it immediately to switch to no-till. On the contrary, the transition should be gradual because if you immediately switch to no-till, it can harm the soil." - Harold van Es remarks.

Soil scientists and practitioners strongly recommend planning crop rotations for 5-7 years ahead with the mandatory inclusion of 30% legume grasses. Suppose there is no possibility of long-term planning, then at least for 2-3 years. In that case, the agronomist can better control soil conditions and select crops both considering the best predecessors and the impact of each particular crop on the arable structure.

Keeping the soil covered is a fundamental principle of conservation agriculture. Both practices, mulching and crop covering reduce soil erosion, provide an additional source of organic matter to improve soil structure, and positively impact moisture conservation. The presence of a mulch layer (of dead vegetation) in conservation agriculture inhibits the evaporation of soil moisture yet leads to more significant water infiltration into the soil profile. Cover crops may be needed if the gap is too long between harvesting one crop and establishing the next. Cover crops improve the stability of the soil ecosystem, not only in the improvement of soil properties but also in their capacity to promote increased biodiversity in the agroecosystem.

The trees/forestry lines improve biodiversity in a particular area, reduce soil erosion, and provide better the capacity of soil to hold water

Soil fertility depends on the quality and quantity of soil organic matter. Organic matter is critical for maintaining balanced soil biological communities, as these are mainly responsible for maintaining soil structure, increasing water infiltration and building the soil's ability to store and release water and nutrients for crop use. Organic matter can be maintained better by reducing tillage and other soil disturbances and increased by improving rotations and growing cover crops, as previously discussed. Organic materials can also be added by amending the soil with composts, animal manures, and crop or cover crop residues imported to the field from elsewhere.

One of the efficacy improvers of soil health is biochar. It is suitable for sequestering carbon in the soil, improving plant growth, and providing crop nutrition. Today, the biochar added values are more and more often explored on the industrial scale, allowing this natural soil nutrient to be generated by safe, low-emitting and resource-efficient technologies.

A teaspoon of soil can contain more organisms than humans living on Earth. (FAO)

Farmers, who implement the biofertilizers, contribute the improving of the soil properties and soil organic carbon stocks. Biofertilizers are substances containing live microorganisms which exhibit beneficial properties toward plant growth and development. Microorganisms mediate almost all the nutrient transformations in the soil, including degradation and decomposition of organic matter and its mineralization (transformation of organically-bound nutrients into to plant-available forms), as well as fixation of essential elements such as nitrogen from the atmosphere. Microorganisms can promote the soil organic carbon stock by increasing plant growth, and thus increasing organic matter incorporation to the soil through roots or above-ground parts; accelerated humification of organic matter, leading to less degradable organic matter constituents (protection); and application of microalgal or cyanobacterial biofertilizers, which due to their photosynthetic activities can increase organic matter contents in the soil crust.

So, to enhance soil win microbiodiversity in BTU-CENTER we recommend to apply biofertilizers, biostimulans and microbial preparation for soil improving.


Left the crop residues on the land for the following decomposition is suitable for improving soil quality and farming. For this practice, applying the biologicals developed for the decomposition of after-harvesting residues of crops is crucial—these biologicals, in general, contain valuable microorganisms, including the N-fixing bacteria.

Just ploughing the plant residues into the soil without necessary control can cause many problems for the farmer.

First, it concerns straw, which has a very long period of decomposition in the soil - 0.5-1.5 years. The increase in the decomposition period of organic mass contributes to nitrogen deficiency in the soil (microorganisms for destruction use soil reserves), increases the accumulation of toxic substances and pathogens in the soil, and limits plant access to the elements of nutrition accumulated in the organic matter.

"We can achieve solutions to the above problems by applying microorganisms directly to the organics, i.e. treatment with a special biopreparation for accelerate decomposition of crop residues. In BTU-CENTER we recommend to apply ECOSTERN. It is required as part of the technology! It contains agronomically valuable microorganisms (bacteria, fungi) and products of their vital functions, the use of which allows manage the decomposition of plant residues and restore the health of soil”, - said Svitlana Korsun, head of the agrochemical research laboratory at the Institute of Applied Biotechnology.

Svitlana Korsun, head of the agrochemical research laboratory at the Institute of Applied Biotechnology.

These microorganisms activate the vital soil processes of effective decomposition of crop residues, enrichment of organic matter and available elements of plant nutrition and neutralization of allelochemicals.

It is essential to know that after one month of applying Ecostern, straw decomposition is 21% -48% depending on the soil moisture level. These figures are the average meaning of 6 years of field trials of preparation in BTU-CENER by itself and in partnership. According to the Laboratory trials, the treatment of corn stalks with ECOSTERN® has increased the amount of carbon of labile organic compounds by 9,7%; there was also a positive trend towards an increase in humus content. Furthermore, in the soil where straw was treated with ECOSTERN, available soil phosphorus increased by 33% and potassium - by 3% compared with control.

If we are talking about harvest increasing, the farmers who switched on the preparation in their technology highlight the improving soil fertility and yields. For example, our statistic trials date of 10 years demonstrates: the application of ECOSTERN with a rate of 1-2l/ha provides the proven average increase of yield:

Like this and even better result is possible to get if keep the recommendation of applying, in particular, to make the application in the morning (early) or evening hours or in cloudy weather with a rate of water discharge of 150 l/ha or more. 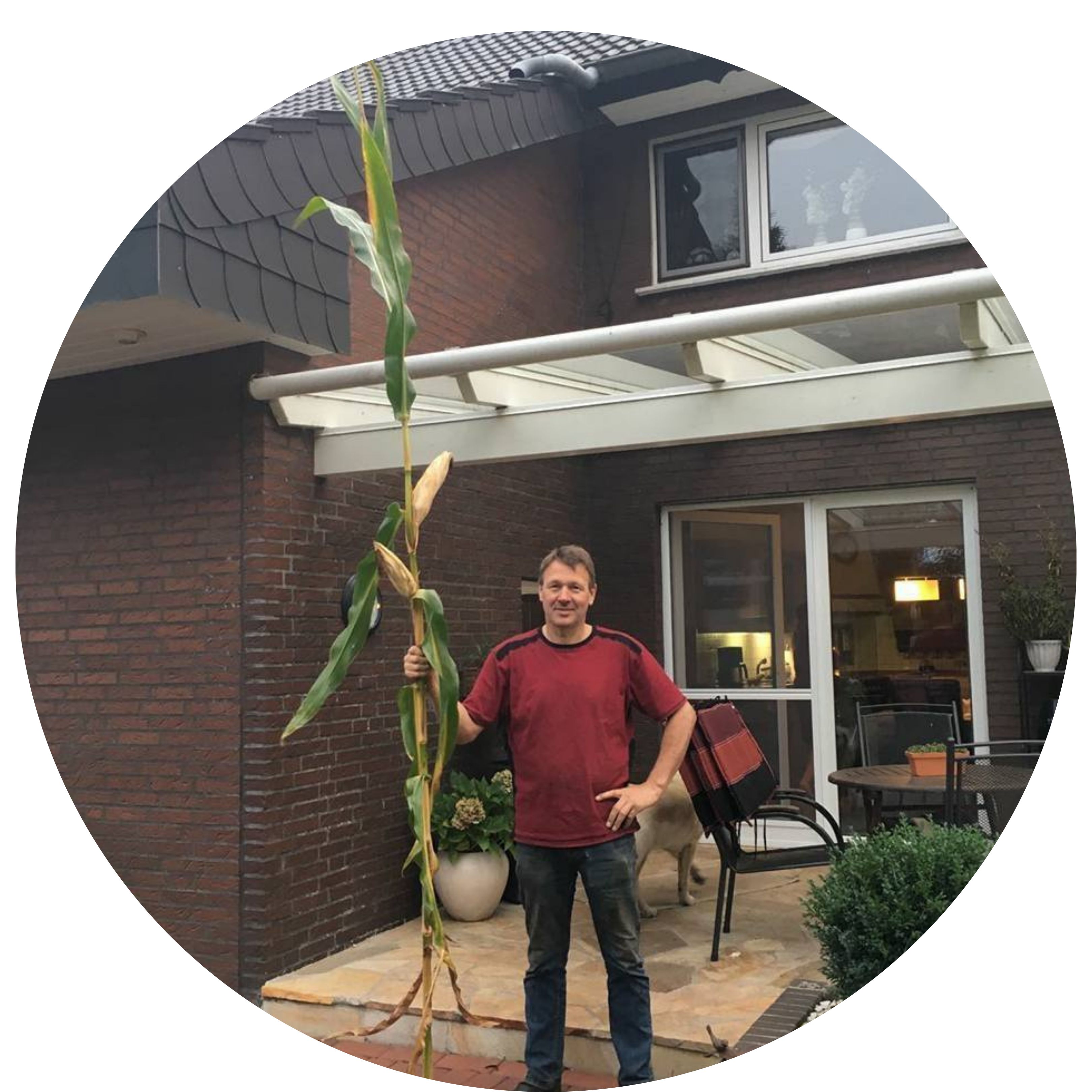 "We implemented ECOSTERN in our farming technology from 2019 to decompose corn residues. From the first year, we have seen evidence of its work which provided us with a good yield on potato, which is the most marginal crop for us. Moreover, we noticed a clear tendency to improve soil health and fertility after two years of applying ECOSTERN. As a result, plants were healthier and stronger during the growing season, and the yield increased significantly. So now we are using ECOSTERN on all our fields after corn, wheat and potato because we see its positive influence on soil and plants." – shares his experience of applying ECOSTERN Gerhard Schulte the Farmer from Germany.

“We start testing Ecostern in 2019 and from first trials have seen its efficiency in residues decomposition. Its far more active in comparison to what we have seen before. Complex composition of the products allows it to work in various conditions and to decompose cellulose and lignin more fast, enriching the soil with organic matter, and thus, providing farmers with better yields on the following crops!” – says Robert Kysler, CEO of ORGANIX company in Slovakia.

Ecostern is confirmed for organic farming:

FiBL certificate of compliance with Demeter International and Reg. (EC) 834/2007

Organic Standard certificate of compliance for use in organic farming and processing.

More information about the features of ECOSTERN and its application rates by crops you can find on our website pages.

Liposam from BTU-CENTER: microbial polysaccharides as an alternative to the chemical adjuvants 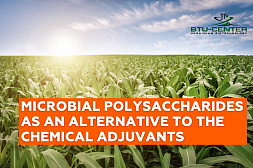 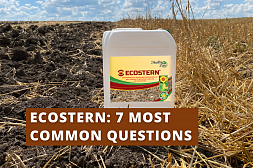