Science and production. SCLEROCID - a joint development of BTU-CENTER and Kernel companies

Vinnichuk T.S. - Cand. Sc. Biology, Scientific Consultant on plant protection issues, Biologist-Researcher of the the LLC “Institute of Applied Biotechnological Transfer”.
Tkalenko A.M. - Doctor of Agricultural Sciences, Head of the Microbiomethod Laboratory of the Institute of Plant Protection of NAAS.

“The exchange of scientific and practical knowledge is the pillar for progress and innovation. In the production of plant protection products, it is very important to build a bridge between science, production of plant protection products and farmers who know the problems of the field,” says Vladislav Bolokhovskyi, General Director of BTU-CENTER. “We have been cooperating with the largest agricultural producer KERNEL for 6 years in accordance with this model. We conduct joint scientific and practical researches on the effectiveness of microbiological preparations, which include a constant exchange of information, improvement of existing formulations of preparations, dozens of studies and regular consultations. During this time, we examined the positive effects of ECOSTERN destructor on the decomposition of pesticide residues in the soil, the destruction of sources of disease infections, and the improvement of soil biological activity.

A few years ago, we began to fight against white rot, which affects thousands of hectares of fields throughout Ukraine. How to beat the white rot with microbiological preparations has become for us the number one question. The result of this collaboration of scientists and agronomists of our companies, BTU-CENTER and KERNEL, has become an extremely powerful biological fungicide - SCLEROCID. We are very grateful to Arkadii Lungul, the Head of KERNEL Research Center, for our dialogue, systematic and deep approach to studies that have been going on for many years. In 2019, we introduced our new product on the Ukrainian market.”

SCLEROCID, a biofungicide against white rot, which is a joint development of KERNEL and BTU-CENTER companies, will be discussed in this article.

White rot or sclerotiniosis is a common disease that affects more than 80% of crop species and causes significant damage to plants not only during the growing season, but also during the storage period.

Sunflower white rot is caused by Sclerotinia sclerotiorum (Lib.) De Bary fungus. The degree of harm caused by the disease depends on many factors, where the weather conditions of the growing year are decisive. A significant amount of precipitation, causing increased air humidity, contributes to the development of sclerotiniosis. The causative agent of the disease affects all organs of a sunflower plant during the growing season ─ from the germination stage to the phase of physiological maturity. Seeds from the affected flower heads lose their sowing and commercial quality.

The degree of damage to plants depends on the time of infestation. Young sunflower perishes due to infection, and on the plants infected at a later stage of growing, puny seeds with a damaged germ and a lower fat content are formed. Oil made of the seeds of infected plants has a bitter taste.

Since the main stock of infection of Sclerotinia sclerotiorum white rot causative agent remains in the soil in the form of sclerotia (and this stock is growing from year to year), protective measures should be aimed primarily at reducing the potential of soil infection. This problem can be effectively solved by using biological plant protection products, in particular, antagonist fungi and hyperparasites.

One of the most promising biological agents for combating white rot is Coniothyrium minitans, which is a soil hyperparasitic fungus that infests Sclerotinia sclerotiorum and causes degradation of the walls of sclerotia and mycelium, using an organic host as a source of nutrients for its development, inhibits the development of a pathogen, and blocks the growth of sclerotia and leads to their decomposition. Hyperparasite Coniothyrium minitans exhibits a long-term effect, eliminating sclerotia and mycelium from the soil and harvested crop during its storage. When applied to the soil, it provides a significant reduction in the infectious potential of the pathogen of white rot during plant vegetation, and reduces the risk of infestation of the next crops in crop rotation.

The effectiveness of the new SCLEROCID preparation was investigated in vitro, in vegetation and production experiments at the trial sites of KERNEL Company.

Laboratory studies. In vitro, scientists conducted a study of the effectiveness of SCLEROCID biological preparation against seed infection by the treatment of sunflower seeds at an application rate of 4 and 5 l/ha, corn (2 and 3 l/ha), soy (1 and 2 l/ha) and rapeseed ( 4 and 5 l/ha).

Table 2. The effectiveness of SCLEROCID against fungal infection of sunflower seed. Laboratory experiment, 2019

Table 3. The effectiveness of SCLEROCID against infection of soybean seed.  Laboratory experiment, 2019


Table 4. The effectiveness of SCLEROCID against infection of Rapeseed. Laboratory experiment, 2019

Table  5. The effectiveness of SCLEROCID against infection of Corn seed.  Laboratory experiment, 2019


Vegetation studies. In the vegetation study on an artificial infectious background, we studied the effectiveness of SCLEROCID biological product against white rot of soy and sunflower by applying seed treatment and spraying during the growing season of plants. For this, 5 seeds of sunflower (soybean) were sown in each pot with the application of Sclerotini-sclerotiorum inoculum (5-6 sclerotia of the fungus together with mycelium per 1 pot).

Fig. 1. Pure culture of Sclerotiniа sclerotiorum prepared for the inoculation

The presence of white rot and the state of soybean and sunflower plants was recorded in the phase of 5-6 leaves. It was revealed that in case of seed treatment with SCLEROCID biological preparation at the application rate of 4 l/t, sunflower plants had larger green leaves, whereas in the pure control (without the inoculum application), yellowing and drying of the lower leaves were observed (Fig. 3 and 4).

The main differences between soybean plants in different variants became noticeable in the phase of BBCH 13 (8-9 leaves). The lower leaves in the control began to dry, and some became stained. In the experimental variants, the plants looked visually healthy without visible lesions.

Thus, according to the results of vegetation studies, it was found that on a rigid artificial infectious background, which caused 100% death of soybean and sunflower plants in the control, pre-sowing seed treatment with SCLEROCID biological preparation at an application rate of 4.0 l/t, soybeans - at the level of 66.7% at an application rate of 5.0 l/t, ensured the 80% germination of sunflower seeds, which was at the same level with control without inoculum application.

In vegetation studies on an artificial infectious background, the technical effectiveness of SCLEROCID biological product was studied during the growing season of sunflower and soybean. An artificial infectious background was created, as in the previous experiment. Infectious load was reduced by 2 times. The planting of crops was carried out on May 21, 2019. We studied the effectiveness of the SCLEROCID application against white rot at different growth phases - a phase of 6-8 leaves for sunflower (budding phase in case of soybeans), before flowering, and double spraying in the phase of 6-8 leaves and before flowering.

Fig. 6. Sunflower plants after the second spraying with SCLEROCID

In 14 days after the second spraying it was determined that disease affected 100% of the plants. The disease development level was 40% (Fig. 7).

Fig.7. The effectiveness of SCLEROCID biological product in case of its application against sunflower white rot during the period of vegetation. Vegetation study. Artificial infectious background, 2019. Legend: A – a phase of 6-8 leaves, B – before flowering.

SCLEROCID showed the highest effectiveness of 87.5% for sunflower plants in case of double spraying (in the phase of 6-8 leaves and before flowering). Its application in the phase of 6-8 leaves was highly effective (72.5-80.0 %), compared with the treatment before flowering (50-75%). In both phases SCLEROCID showed high effectiveness of 75-80% at the application rate of 2.0 l/ha.

14 days after repeated spraying, browning of the root part of the soy plant stems was observed in control, while in other variants such symptoms were absent (Fig. 8).

Fig. 8. Browning of the root part of the soy plant stem

In control, the development of white rot on soy plants was high and amounted to 73.3%.

Fig.9 The effectiveness of SCLEROCID biological product in case of its application against soybean white rot during the period of vegetation. Vegetation study. Artificial infectious background, 2019. Legend: A – a phase of 6-8 leaves, B – before flowering.

The highest effectiveness (81.6%) of the preparation was recorded when applied twice. Spraying in the budding phase also had high efficiency (technical efficiency was 62.4-75.4%) as well as treatment at the application rate of 2 l/ha (59.1-75.4%).

SCLEROCID application rate of 1 l/ha in case of a high infectious load was insufficient to protect soybean, especially when applied before flowering (technical efficiency was only 40%).

Field studies. During 2018-2019 scientific and industrial field studies of SCLEROCID against sunflower white rot were conducted in Kyiv, Vinnytsia and Lviv regions. Examination of sunflower crops showed a high percentage of plants affected by the basal form of white rot, which indicates the presence of a pathogen infection metter in the soil (Fig. 10). The study results showed SCLEROCID high efficiency against white rot when applied at the rate of 2-3 l/ha in combination with ECOSTERN at the rate of 1 l/ha in autumn by spraying the soil and plant residues after harvesting the preceding crop and subsequent incorporation of these preparations into the soil to a depth of 10-25 cm. Therefore, with a disease development level of 26.8% in the control, the technical effectiveness of the combined use of these preparations reached 75%, the number of diseased plants decreased from 33% to 8%.

As in the vegetation experiments, in the field study the positive effect of SCLEROCID and ECOSTERN biological preparations on the growth and development of plants was noted — the plants were higher, their stems were thicker and leaves were greener. Yellowing of the leaves was noted in the control (Fig. 10).

Fig. 10. Signs of the basal form of sunflower   white rot
Fig. 11. The effect of ECOSTERN and SCLEROCID biological preparations on the physiological state of sunflower plants.

This results were obtained due to the ability of the microorganisms containing in preparations to inhibit the development of phytopathogens, neutralize phytotoxins, improve the biological activity of the soil and improve its physical and agrochemical properties.

1.      Treatment of sunflower seed with SCLEROCID at the application rate of 4-5 l/t provides protection of seeds from infection of white rot, Ascochyta diseases, gray rot, and Mucor mold. At an application rate of 1 l/t, SCLEROCID is effective against fungal infections of soybean seeds (Fusarium, Ascochyta); against Peronospora and Alternaria pathogens of rape  (4 l/t); against Fusarium infection of corn seeds (3 l/t).

2.      Seed treatment with SCLEROCID contributed to the improvement of sunflower seed vigor by 19-20%, germinating power - by 15-17%; for soybeans - by 4-7% and 9-10%; for rapeseed- by 5-9% and 8%, and for corn- by 4-6% and 7%, respectively.
3.      On the artificial infectious background, SCLEROCID showed the highest effectiveness for sunflower and soybean seeds when sprayed twice (in the phase of 6-8 leaves and before flowering) - 87.5% and 81,6% respectively.
4.      In case of presence of a Sclerotinia infectious matter in soil,  first preventive spraying of plants shall be done in the phase of 6-8 leaves (ВВСН 16-18) to protect plants from the basal form of white rot.
5.      To protect the plant head from the white rot, repeated spraying shall be done at the beginning or in the middle of flowering (ВВСН 61-65).
6.      In case of possible strong development of white rot, SCLEROCID will provide high efficiency at the application rate of 2.0 l/ha.
In case of predicting moderate development of disease, the application rate of 1.0-1.5 l/ha may be sufficient in the phase of 6-8 leaves.
7.      In autumn, spraying soil and plant debris with SCLEROCID at the application rate of 2-3 l/ha in combination with Ecostern at the application rate of 1 l/ha provides high technical effectiveness of 75%; the number of diseased plants decreased from 33% to 8%.

for protecting field crops from the white rot 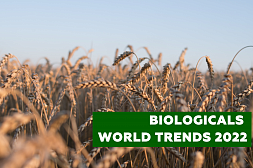 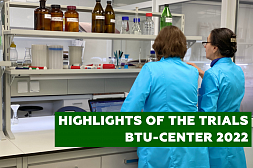