RESEARCH: IS IMPROVEMENT OF NPK ASSIMILATION AT THE EXPENSE OF PK-MOBILIZERS POSSIBLE?

Fertile soils are the base of any agrotechnology. Fertile regime of soil is formed under the influence of complicated system of ecological factors. Microbial groupings of soil form the largest resource of biological variety and largely determine its fertility. Microorganisms are in close connection with all the components of biocenosis, forming the system “soil-plant-microorganism”, with the participation of which the destruction of organic substance, circulation of nutrients, maintenance of plants with all necessary nutrients happen.

What has been researched?

To research the real qualities of PK-mobilisers, a popular biological fertilizer Groundfix produced by BTU-CENTER was chosen. Groundfix is a PK-mobiliser and N-faxator that contains complex of microorganisms which are able to convert phosphorus and potassium from insoluble components into easy-accessible for plants form and also to fix nitrogen from the atmosphere and to make it accessible for plants. At the expense of release of phosphorus and potassium, namely from the soil and mineral fertilizers, their assimilation by a plant increase. Besides, Groundfix improves soil structure, its air and moisture supply and bacteria in its composition, produce carboxylic acids, amino acids, enzymes, phytohormones, antibiotics and other substances required for the improvement of adaptive and immune qualities of the plant.

As a result, fertilizers work more efficient which helps to increase the profit from a hectare at the expense of costs reduction on application of other fertilizers up to 30% and to increase crop yields up to 25%.

During the last at least 5 years the specialists of BTU-CENTER have taken more then 60 researches regarding the efficiency of Groundfix usage on different crops and by different ways of applying the product. Let’s consider the results of the research 2021 which were obtained on winter wheat and sunflower in two natural climatic zones in 5 key research institutions.

Research on winter wheat was held at Institute of Steppe Agriculture (IoSA NAAS) and Khmelnytsk State agricultural research station (KSARS NAAN), where there were different initial conditions, namely nitrogen, potassium and phosphorus content. More is in the table below.


Considering soil analysis, the specialists of BTU-CENTER have used PK-mobiliser Groundfix in the norm of 3 l/ha in pre-sowing cultivation. This had a positive effect on mycological condition of the soil. Herewith the absorption of macro elements by wheat has increased and its removal with a harvest has become greater in accordance. This has reflected on not a significant decrease of easy hydrolyzed nitrogen, movable phosphorus and exchangeable potassium at the end of vegetation compared to the control. It is important that in the conditions of the northern steppe on the right bank of Ukraine not only the increase of crop yield was received but also the increase of movable phosphorus content in the soil.

Groundfix was used in the norm of 4 l/ha in the pre-sowing cultivation which made it possible to increase nutrients content in the soil and its absorption. Data analysis has showed the increase of light hydrolyzed nitrogen content by 2,8 mg/kg, movable phosphorus by 25 mg/kg, movable potassium by 12,5 mg/kg in the soil at the end of vegetation. This, in its turn, has had a positive effect on plant growth and development and has reflected on sunflower yield increase, it was 0,19 t/ha (8,8%) compared to the control level 2,15 t/ha (figure 3).

At Odessa State agrarian university, the research was held on the southern heavy loamy chernozem which had pHsol 4,9–5 and humus content - 2,76 %. Sunflower hybrid LG 5663 CL was sowed in the experiment, the predecessor is sunflower. By the technology the usage of soil herbicide Oscar Premium in the norm of 3,5 l/ha was provided. Two methods of preparation applying were examined: Groundfix 5 l/ha in pre-sowing cultivation and Groundfix 5 l/ha with soil herbicide Oscar Premium after sunflower sowing.

As the result the increase of nutrients absorption from the soil has been found after both methods of application. It has positively affected the efficiency of sunflower: the diameter of the basket has increased by 0,5 cm (in pre-sowing cultivation) and by 0,8 cm (with soil herbicide) respectively, and the mass of 1000 grains has raised by 3,52 і 4,55 g respectively, the mass of seeds from the basket has raised by 2,12 і 8,97 g. It has given sunflower yield increase by +0,18 and 0,30 t/ha compared to the control level 1,94 t/ha (figure 4). Crop yield increase has also influenced the growth of nutrients removal with the harvest.

At Institute of Agricultural Irrigation NAAS the research was held on dark-brown medium loamy soil with рН - 7,1, humus content - 2,2 %, nitrate nitrogen - 4,8 mg/kg, movable phosphorus - 48,7 mg/kg and movable potassium – 387 mg/kg of soil. The sowing was carried out by sunflower hybrid Slavson, as a predecessor there was winter wheat. After the sowing, soil herbicide Hortus was applied. Fertilizers in a dose of N45P30 were also additionally applied.

Groundfix application has allowed to optimize nutrient regime of the soil and to balance microflora, especially while applying in a row. It has also had a positive effect on the crop yield. As a result: while applying Groundfix in a norm of 5 l/ha in pre-sowing cultivation an increase which was received is 0,11 t/ha, using 5 l/ha of biopreparation with soil herbicide – the increase is 0,16 t/ha, and while using 0,75 l/ha of Groundfix in a row – the increase is 0,21 t/ha, compared to the control level 2,25 t/ha.

What is the result?

Thus, the research at the leading scientific institutions proves the necessity and efficiency of usage of PK-mobiliser Groundfix for activation of positive soil-biological processes, soil microflora renewal, increase of its fertility and realization of genetical potential of sunflower as well as winter wheat.

According to the results of the researches held at three scientific institutions located in forest-steppe and steppe of Ukraine it was found out that by different methods of application of Groundfix biofertilizer the positive tendency of better nutrients absorption from the soil is observed on sunflower which has reflected on the increase of structural elements of the harvest and crop yield. 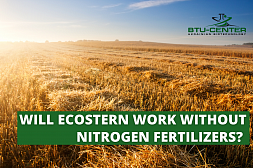 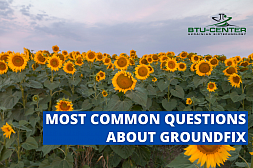