Effectiveness of the use of bacterial stubble decomposers in the Southern Steppe agriculture was investigated by
ANATOLIY KOVALENKO, Candidate of Agriculture Sciences
Institute of Irrigated Agriculture of the NAAS (Kherson)
Co-author: Yulia Sergeeva

The return of plant residues to soil is of great importance as it is the main source of organic carbon for soil biota and subsequent crop rotations. In this process, one of the strategic areas of modern agriculture development is the use of biological products, which allows recovering natural resources. Preparations of microbial decomposers play an important role among such products. Such microbial agents are environmentally safe. Microorganisms included in the composition of biocomplexes are symbiotic, they not only enhance nitrogen nutrition of plants, but also increase the amount of mobile phosphorus and potassium forms, activate the mineralization of hard-to-reach phosphates and other soil minerals.

Due to decomposers, the rate of soils degradation decreases, the mass of soil microflora increases to 3-5 t/ha, thus maintaining the soil biological activity, it becomes "alive and healthy". That is, there was an opportunity to return to the soil nutritious substances, in particular, valuable organic matter.

Decomposers are divided into the following groups: of fungal origin, bacterial origin and others (humates, trace elements, nutrient medium, biologically active substances, etc.). Decomposers of fungal origin are dominated by the preparations with the content of Trichoderma fungi. Fungi Tr. Harzianum і reesei have the largest cellulosic activity among them. Other Trichoderma fungi are characterized by a more pronounced fungicidal property than cellulosic.

Cellulose decomposer - spores and unsporting bacteria, mycelium and the rudiments of microscopic fungi.

Thanks to the use of decomposers, it has become possible to turn nutrients into the soil, in particular, valuable organic matter. So, if the total yield of winter crops biomass is 120-160 hwt/ha, the soil returns to 40-60 hwt/ha of straw; in spring crops, if the biomass is 80-120 hwt/ha, - 30-35 hwt/ha returns with straw.

In our studies on the wheat straw decomposition, the winter yield of its grain for plowing under black pairs was 5.80 t/ha, for chisel cultivation - 5.50 t/ha, while for small-cultivation - 4.82 t/ha. The entire grain harvest was removed from the field. The biomass of the stems was 6.38,
6.5 and 5.30 tons per hectare respectively, and was left on the field in the form of stubble and crushed straw.

The N:C ratio in winter wheat straw is 1:73 with a nitrogen content of 0.51 and 37.48% of carbon. The content of phosphorus in straw was 0.25%. The total gross nitrogen content in straw remaining after harvesting winter wheat in an option using plowing was 32.5 kg/ha, for chisel cultivation at the same depth -30.8 kg/ha, while the shallow nonmoldboard cultivation - 27.0 kg/ha. The carbon content of straw was 2391, 2268 and 1986 kg/ha respectively.

The post-harvest period in the Southern Steppe was characterized by high air temperatures. Thus, the average daily temperature in July and August was +23 .. + 24 °C, in September +20 .. + 21 °C and only in October there was a significant decrease to + 9 + 10 °С. However, the number of fallout during this period is negligible. Such course of weather conditions and the soil condition are not always favourable for the effective activity of microbial preparations of stubble decomposers. However, with their use, the straw and post-dormancy residues decomposition rate significantly increased against the option without their use (Table 1).

Fig. Correlation between wheat straw decomposition degree and N03 content in a layer of 0-30 cm of soil under sorghum crops

Ecostern increased the straw decomposition rate the most - 58.5% - 90 days after its plowing, which was 31.4% higher than the control preparation without treatment. Moreover, Organic-Balance, in which the use of which decomposed 56.2% of straw wheat yields, also was quite effective. Stubble Decomposer and Cellulose Decomposer showed the slowest decomposition, which caused its decomposition by 51.7% and 51.5% respectively.

The application of the No-till system and the processing of unrefined residues of winter wheat reduced the straw decomposition intensity to 42.6-46.7%.

Saving moisture
After winter wheat, sorghum was sown. Observing the dynamics of water regime in the arable layer of soil showed that the reserves of productive moisture in the sorghum crops were sufficient for the effective activity of the microflora and the growth and development of plants only in the first half of their vegetation. In addition, they depended on both the soil cultivation and the micro-nutrients used. Although in the control option without straw treatment with microbial preparations the soil cultivation did not affect soil moisture, in options with the use of these preparations it was higher than deep cultivation. The best conditions for moisturizing were the straw treatment with Organic-Balance, Ecosterm and Cellulose Decomposer. It should also be noted that under conditions of the use of shallow nonmoldboard cultivation, the application of all microbial preparations has led to a decrease in its moisture content compared to the control option. This is probably due to straw covering in the top layer of soil 0-10 cm, where the effectiveness of the preparations was low.

The use of stubble decomposers affected the microbiological activity of the soil and its nutritional status. Thus, the amount of nitrates in the arable soil layer at the beginning of the sorghum vegetation was higher than in straw treatment with Ecostern - 64.5 mg/kg. Their content was lower by 11.3-13.7 mg/kg in the options with the use of preparations Organic-Balance, Bionorm and Stubble Decomposer. Subsequently, an essential advantage was the use of Organic-Balance preparation. It should also be mentioned that there was a significant decrease in the content of nitrates with the straw treatment by a microbial preparation Cellulose Decomposer.
On the basis of these studies, it was established that there is a close correlation between the winter wheat straw decomposition rate in 90 days and the content of NO3 in a layer of 0-30 cm of soil under the crops of grain sorghum: T = 0.92 (figure).

Changes in biological activity and nutrient regime of the soil in the process of straw decomposition under the influence of stubble decomposers in various soil treatments also affected the level of sorghum yield (Table 2). Thus, against the background of the application of plowing, the highest productivity of the early-stage Oggan (Oggana) hybrid was obtained from the application of Organic Balance - 7.34 t/ha and 0.34 t/ha less than straw processing with Ecostern. Straw treatment with preparations Bionorm and Cellulose Decomposer is inferior to the yield of organic sorghum for Organic-Balance Preparation by 2.12-1.58 t/ha.

The transition to a deep nonmoldboard cultivation of the soil somewhat mitigated the effect of stubble decomposers, the difference between the alternatives was 0.01-0.24 t/ha. Here, Ecostern and Cellulose Decomposer are preferred - 6,50-6,51 t/ha.

When using shallow nonmoldboard cultivation of the soil, the practically identical crop yields of sorghum after straw treatment were obtained after treatment with Stubble Biodecomposer, Ecostern and Organic Balance - 6.04-6.17 t/ha. Straw treatment with Bionorm and Cellulose Decomposer has even led to a decrease in yield, as compared with control.

The dispersion analysis of the experimental data obtained made it possible to establish that the most significant influence on the sorghum yield had the decomposers, the share of which is 55.0%. Soils cultivation had a little less influence - 14.0%.

Thus, experimentally it is proved that the use of microbial preparations significantly increases the degree of straw and post-harvest residues decomposition

How to prevent herbicides leaching in the soil? 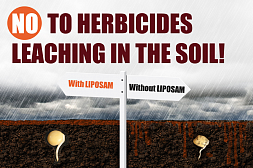 Why does corn need mycorrhization? 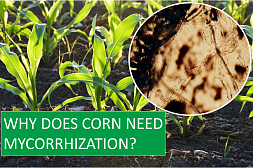